"Tōge or Touge (峠?) is a Japanese word literally meaning "pass." It refers to a mountain pass or any of the narrow, winding roads that can be found in and around the mountains of Japan and other geographically similar areas, like the legendary Nordschleife in Germany.
In order to decrease the incline of mountain roads, thereby making them easier for commercial trucks to pass, engineers place a series of S bends in steep roads that provide access to and from high mountain elevations. These passes have become popular with street racers and motorsport enthusiasts because they provide a fun and challenging, albeit dangerous, course."

We all decided to drive up to the canyons at 1:00am for some good old fashioned Touge. Warren, (driver) and Victor, (co-driver) in one car, and Patrick, (driver) and me, (co-driver) in the other car. We pulled off on the road at the bottom of the canyon to wait for some roll-up racers to touge with, and we ended up chasing after some white car. Big mistake.

Warren and Vic chased right behind the white car as we went uphill, and Pat and I followed right behind them, but little did we know that there was another car coming up right behind us. It looked like a junkie little car, so we didn't really mind. Funny thing is, we ended up being sandwiched between a 1993 Nissan 180sx/240sx and what seemed to be a 1990 BMW E30 M3, both tuned, and both fully experienced. After reaching the top, all four cars turned around and we started downhill, bumper to bumper. In the first straight, Warren and Vic were losing the 240 because of its speed and incredible precision while Patrick and I were struggling to keep up with Warren, the BMW behind us was really on our tail, so Pat had to speed up. The 240 finally let us know that he was a Canyon God by turning off all of his lights completely and began to take every sharp and tricky corner blindly and flawlessly.

This threw Warren off, but he tried to keep up. and as the 240 was out of sight when hitting a tricky left turn. Warren then slipped out while taking the turn too fast at about 35+mph (speed limit was 10-15mph) and hit the guardrail with his back bumper. Pat and I were pretty behind and were going about the same speed to catch up when we saw Warren's Cougar completely sideways into the guardrail, so Pat slammed on the brakes just in time and was literally inches away from collision. We switched co-drivers and all headed back downhill to stop at a liquor store, which was at about 2:00am. We just talked about what happened and stuff, crazy night. 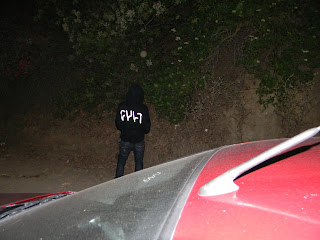 Me practicing a "pre-race ritual". 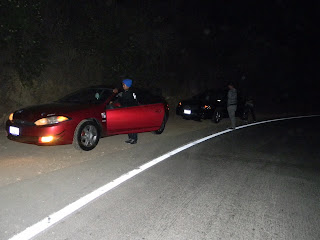 After a couple runs, decided to post up and wait for a roll-up race. 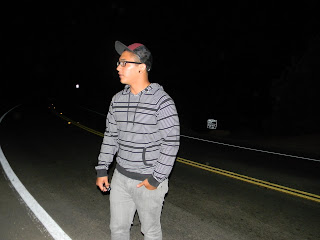 Patty B. chillin after trying to chase the "Seeker" Cougar. 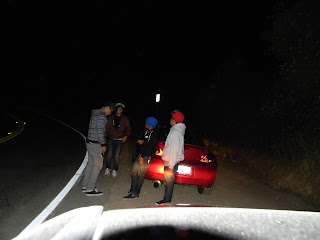 Pat wasn't that bad trying to keep up with Warren and the other guys,
after all, it was his first real canyon race.
Props, Pat, mad props. 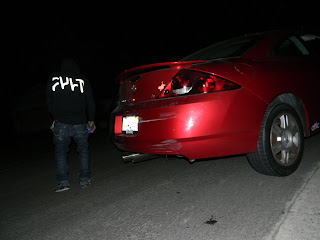 Aftermath. "Not Too Shabby".
We'll be back up there.